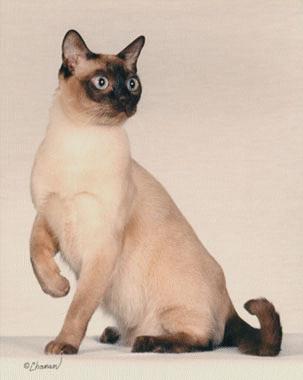 The Tonkinese is a man-developed breed which is a cross between the Siamese and Burmese. It is a socially oriented cat which enjoys people, other cats, dogs, and children. It is medium in size and very muscular. They remind many people of the old apple-headed Siamese of twenty years ago.

The ideal Tonkinese is intermediate in type, being neither cobby nor svelte. It should give the impression of an alert, active cat with good muscular development. The cat should be surprisingly heavy. While the breed is to be considered medium in size, balance and proportion are of greater importance. Females usually run 6-8 pounds and males 8-12. They are very muscular so appear lighter than they are. 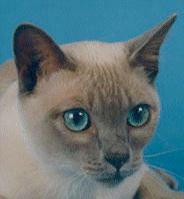 The head is a modified wedge, the muzzle is blunt with a slight whisker break.

Tonkinese are the only pedigree cats with aqua eyes. Eye color varies from blue to green/gold. The eyes are an open almond shape.

The coat itself is short and lies very close to the body. It is very silky and has a wonderful feel.

Coat pattern refers to the color of the coat in relationship to the color of the points (extremities). Both Siamese and Burmese are called pointed cats because their points are a different color than their body. In Siamese there is a lot of contrast between coat and points. In the Burmese this difference can be so small as to not be noticeable and most people do not consider them a pointed cat. It is most noticable in the dilute colors and as kittens, whereas the adult Sable color appears to be solid. 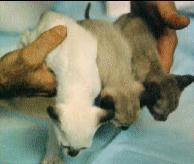 Tonkinese have three coat patterns: pointed, mink, and solid. The three kittens in the illustration have the same color Natural (look at the ears), but each have a different coat pattern. From left to right they are: natural point, natural mink, and natural solid. Natural is a color name described in the next section.

Tonkinese, Siamese, and Burmese share the same four colors although they call them different names. The colors refer to the point color (face, ears, legs, and tail). The difference between the three breeds is the color of their bodies not the color of their points. 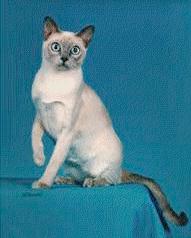 GCH LAWest WHYSYWG, a female Platinum Mink Tonkinese. Image © Copyright Chanan. All rights reserved.
The Platinum is the same color as a Siamese Lilac. It has a body of pale, silvery grey with warm overtones with blue-grey noses & pads and frosty grey points. 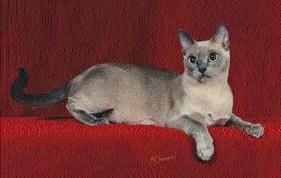 CH LAWest Panne Blue Velvet, a female Blue Mink Tonkinese. Image © Copyright Chanan. All rights reserved.
The Blue has the same color name in a three breeds. It has a body of soft grey-blue with warm overtones with blue-grey noses & pads and blue-grey points.

GCH GPR RW Sonham Princes Maria Thunderpussy, a female Natural Mink. Image © Copyright Chanan. All rights reserved.
The Natural is the same color as a Siamese Seal and a Burmese Sable. It has a body of medium brown with dark brown noses & pads and dark brown points.

The photo of Brut at the top of the article illustrates a Champagne Mink.
The Champagne is the same color as a Siamese Chocolate. It has a body of buff-cream with cinnamon-brown nose & pads and medium brown points.

As pretty as Tonkinese are, their personality is even better. A whole book could be written on the Tonkinese personality. Tonks are sociable, fun loving, involved cats. They are dog cats in that they are people oriented like a dog with the convenience of a cat.

They have the intelligence and curiosity of a Siamese with a more laid back personality of a Burmese. If you want a couch potato cat known for its independence this is not the cat for you. They do have a strong personality and can be stubborn, but they are so lovable it’s hard to get angry with them. Although active and muscular they are not high strung and are very happy cats.

They are very social. They like people, other cats, children, and dogs. They do not like living alone without attention. Frequently people have two so they can entertain each other if you work. They bond easily so they adjust well to new owners. They adjust well to living inside as they love people. If left to roam outside, they may be stolen or contract a health problem.

They usually play fetch and will jump to your shoulder. The shoulder trick is fun early in the morning while you are getting dressed for work! A cat tree is a good way to help exercise them. They love being high and running up and down the tree helps use some of their excess energy. They hate closed doors and want to know everything that goes on.

Documents exist which indicate the Chocolate Siamese of the 1800s were actual Tonkinese, but the first known Tonkinese was Wong Mau in the 1930’s who was the ancestress of the Burmese. She was bred with a Siamese and was the only known cat of her kind. Over the years the Burmese and Siamese breeders carefully bred out the Tonkinese characteristics which resulted in the two breeds of today. From the 1950’s to 1970’s some breeders started to cross breed Siamese and Burmese forming the Tonkinese of today. There was a lot of controversy though as Burmese and Siamese breeders were trying to eliminate the characteristics that made up the Tonkinese. They were first accepted as a recognized cat breed by the Canadian Cat Association (CCA) and then by the Cat Fanciers Association (CFA) in 1984. Some people still feel there is no need for this breed but try telling that to a Tonkinese owner.

The short thick coat does not require much maintenance. Their coat is sleek and soft and you may want to occasionally give it a bath. They should brushed and usually enjoy it as part of their human interaction.

In general Tonkinese are healthy cats with no known common genetic problems. As a Siamese derivative they share in common health issues. They are prone to gingivitis and brushing with a child’s toothbrush is useful. Care should also be taken by your vet when anesthesia is used. As kittens they sometimes get upper respritory infections (colds), but these are not usually serious.

This depends on your point of reference. If you have known a Siamese – not as much. If you are used to a sedate quiet long hair – a lot. Tonkinese talk in sentences and paragraphs. They tend to carry on conversations as opposed to talking to themselves. They expect you to listen. 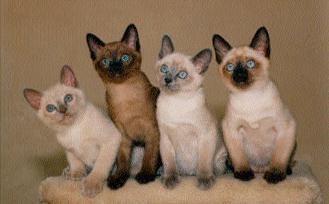 “How much do they cost?”

Tonkinese sold as pets usually cost $350-500. Sometimes breeders will have older cats available to a good home for much less; these can be excellent pets. Most breeders will not let them go until they are 12 weeks old, although this varies with the breeder. Image © Copyright Carmen Martino. All rights reserved.

“Do they change color as they get older?”

Like Siamese and Burmese, they get darker as they get older. The facial mask starts on the nose when the kitten is a few days old. It then spreads over the face and darkens with age. The kitten on the left in the above kitten photo is Casper Ghost also shown in the head, eye color section. You can see how the color has spread and his body has also gotten darker.

“Where did the breed’s name come from?”

I have been told Tonkin is the ancient name of Viet Nam.

“Do you comb their fur to get the little curly-cue on their chest?”

No. The cow-lick on the chest occurs naturally and I’ve never seen a Tonk without one.

“Where do I find a breeder?”

Either contact one of the breed clubs below for a reference in your area, check with your veterinarian, or attend a cat show in your area to see if there are any local breeders. Breeders of all breeds of cats may be found through the Fanciers breeder listing page

Tonks West (CFA) A CFA regional west coast club of Tonkinese lovers who are organized to help the breed.