Harrison Weir, father of all cat shows, was a great admirer of these cats. “The ordinary garden cat,” he wrote, “has survived every kind of hardship. That he exists at all, is a tribute to his strength of character and endurance.” Mr. Weir’s devotion to the shorthaired British cats was shared by Mr. Jung, who was to become one of the first cat show judges. He believed if these beautiful cats were thoughtfully bred, a race of cats with aristocratic pedigrees and the same inherent goodness and quality would be developed. The breed produced was named the British Shorthair and were the only cats to be shown as pedigreed at the first cat shows. All others were simply shown as longhair or shorthair, divided by their various colors.

The British standard calls for the cat to be of compact build, powerful and well-balanced. A full broad chest, short strong legs, rounded paws and a tail that is thick at the base and tapers slightly to a rounded tip show off a “football player” physique. The British Shorthair has a round head with good width between the ears. The eyes are round and wide-open. One of the most appealing features are the “Brit’s” built-in smile caused by the round prominent whisker pads. This smile was never displayed better than in Lewis Carroll’s Cheshire cat; originally a tabby British Shorthair. The British Shorthair coat is like no other; short, dense, like deep pile carpet. The coat needs minimal care yet has a luxurious feel. 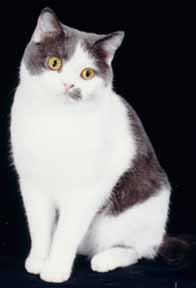 British Shorthairs are very affectionate, quietly following you from room to room until they can settle contentedly by your side. Gifted with lasting patience and confidence, Brits are especially good with children and other types of pets. A moderately active cat, they are not destructive as a breed, adapting well to any size household. British are very easy going and are affectionate to numerous people in the circle they consider family.

Most breeders recommend a high-quality dry food. Care must be taken to not allow your British Shorthair to get fat, or its life span will be shortened. Middle-aged cats (5-10) are most likely to have weight problems which can usually be controlled by switching to a low-calorie food. Feed controlled portions once or twice a day; if your cat seems to be overly heavy, ask your vet for more specific advice.

On the whole, British Shorthairs are very healthy and long lived. You can expect a British to live from 14 to 20 years.

Individuals within any breed are fairly closely related, and have many characteristics in common. This includes genetic strengths and weaknesses. Certain genetic health disorders may be more or less of a problem in a particular breed than in other breeds. For example, a breed may have a slightly higher incidence of gum disease than the cat population as a whole, but have a lower incidence of heart disease or liver disease.

Genetic problems generally only affect a tiny minority of the breed as a whole, but since they can be eradicated by careful screening, most reputable breeders try to track such problems, both in their breeding stock and the kittens they produce. By working with a responsible breeder who will speak openly about health issues, you are encouraging sound breeding practices.

In the British Shorthair, the most common inherited health problems are gingivitis (red inflamed gums), which will cause an affected cat to require careful dental care, and cardiomyopathy, which can cause anything from a minor heart murmur to severe heart trouble. Again, neither of these problems is specific to the breed.

“Are they all gray?”

“What is the difference between a British Blue and a Russian Blue?”

British have gold or copper eyes. Russians have green eyes. British have a denser harsher coat, the Russian coat is thick but soft and tends to not be as dense. A British has a heavy semi-cobby body, fairly large and built for strength. A Russian is a lithe moderate cat, a smaller leaner build that is great for speed and quickness.

“My cat is such-and-such a color — is he/she part British Shorthair?”

Probably not. Since British Shorthairs are fairly rare in the US, a rogue British wondering around the streets of suburbia is not likely. However, the breed was developed as a shorthaired street type cat and still has much of those characteristics in today’s show cat. So while your kitty is probably not part British Shorthair, the similarities you may see come from the moggies of England found behind our competition British Shorthairs today. 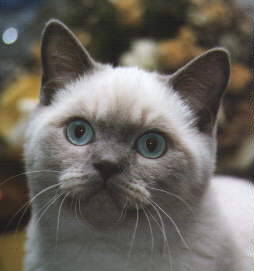 “What other colors do British Shorthairs come in?

Nearly all colors found in the domestic cat world. All tabby colors, all solids, calicos and bi-colors. In England and other countries it is possible to even find pointed and solid chocolate and lilac colors.

“Do they all have copper eyes?”

No. Any silver colored British must have green to hazel. The shaded silver and shaded golden colors have green eyes. Solid whites can have blue eyes, gold eyes or odd eyes. The pointeds have blue eyes. However, all other colors must have gold to copper eyes.

“How big do British Shorthairs get?”

At maturity, a typical British male will be about 12 to 18 pounds, with the females somewhat smaller. This does vary — some families run smaller, some larger. It does take this breed a long time to mature. Both sexes will continue to fill out and thicken up until 4 years of age.

“Do the females or the males make better pets?”

Each sex has its own set of characteristics. Males tend to be more happy go lucky, and are less picky about who they receive attention from. Females are very loyal to a smaller number of people and are a bit more serious. Females are quicker and I think they are smarter then the males.

“Do British Shorthairs like to sit on your lap?”

No. A British likes to be around you and by you. They will follow you, watch you and basically supervise all aspects of life in their house. They simply do not like to be “controlled”. Being a larger heavy cat, they feel very uncomfortable off the ground.

“How active are British Shorthairs?”

British have an expected kitten activity level up until they are about a year old. They start to slow down after a year. By the age of 4 to 6 yrs. they are very sedentary; “couch potatoes”.

“Do British Shorthairs meow a lot?”

No, British Shorthairs rarely meow. They are a very quiet unpretentious cat.

“Since British Shorthairs are so big and sturdy are they safe outside?”

No. There is no domestic cat big enough that can fight off an urban coyote, large raccoon, automobile or a disease like feline leukemia. Keeping your British Shorthair inside will also limit its exposure to fleas and intestinal parasites.

There are a relatively small number of British Shorthair breeders in the world, and most produce very few kittens each year. You probably will have to get on a waiting list, especially if you have your heart set on a specific color. A breeder who is not able to provide a kitten within a reasonable time may refer you to another breeder. Additional breeder listings can be found in Cat Fancy and Cats Magazine in the US and Canada, and in Cat World in the UK. Any registering association in your area should also be able to provide breeder contacts.

Breeders of all breeds of cats may be found through the Fanciers breeder listing page.