Once you’ve been owned by an Abyssinian, you will never look at the world the same way! 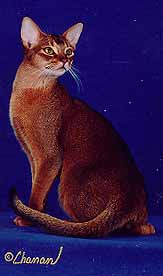 Description of the Abyssinian

The Abyssinian is a colorful cat with a distinctly ticked coat, medium in size and regal in appearance. It is important that the Abyssinian be balanced in proportion.

The head is a modified, slightly rounded wedge without flat planes and should flow into the arched neck without a break. The ears are alert, large and moderately pointed; broad, and cupped at the base and set as though listening. The eyes are almond shaped, large and expressive, being neither round nor oriental. A fine dark line, encircled by a light colored area should accentuate the eyes. The color of the eyes can be either gold or green.

The body is medium long, lithe, graceful with well developed musculature that is not coarse. It is medium in conformation and should not be either cobby or too svelte. Most importantly, an Abyssinian is a balanced cat. The Abyssinian is fine boned and stands well off the ground giving the appearance of being on tip toe. The tail is fairly long, thick at the base, and tapering. The coat is soft, silky, fine in texture, but dense and resilient to the touch. It is medium in length but must be long enough to accommodate two or three dark bands of ticking.

Color on an Abyssinian is important and must be warm and glowing. The ticking, distinct and even, shows dark colored bands contrasting with lighter colored bands on the hair shafts. Undercoat color is clear to the skin. Preference is given in the showhall to cats that are free of tabby markings on the chest and legs. The tabby markings should only appear on the face and tail. The facial markings should be dark and distinct.

The following are the color descriptions taken from the CFA Abyssinian Standard:

RUDDY: coat ruddy brown (burnt-sienna), ticked with various shades of darker brown or black; the extreme outer tip to be the darkest, with orange-brown undercoat. Tail tipped with black. The underside and inside of legs to be a tint to harmonize with the main color. Nose leather: tile red. Paw pads: black or brown, with black between the toes, extending slightly beyond the paws.

BLUE: coat warm beige, ticked with various shades of slate blue, the extreme outer tip to be the darkest, with blush beige undercoat. Tail tipped with slate blue. The underside and inside of legs to be a tint to harmonize with the main color. Nose leather: old rose. Paw pads: mauve, with slate blue between toes, extending slightly beyond the paws.

GC Agouti’s Not In The Script

The Abyssinian is an active, intelligent cat that loves people. Although they are quite beautiful, they are not content to lie around and just be admired. Abys are not always thought of as lap cats, but love to be where you are. They interact with their owners and often enjoy the company of another cat.

Abyssinians are often thought of as cats that like to be in high places, such as the top of a refrigerator or a bookshelf. They seem to be more inclined to use their paws like a human would use their hands. Abys are not known for being particularly loud cats and can communicate their feelings and desires in many ways.

It is often said that Abys have a great love of water. They seem to enjoy playing in a dripping faucet, as well as drinking from them. Loyal is often used to describe the Abyssinian and they make wonderful companions.

History of the Abyssinian

The Abyssinian is one of the oldest known breeds, but it’s true history has been surrounded by much speculation. The Abyssinian appears to resemble the paintings and sculptures of the ancient Egyptian cat, however there is no proof of this.

Some believe the Aby was brought from Ethiopia, formerly Abyssinia, back to Great Britain in the 1860’s. Others feel the origin of the Abyssinian breed to be at the coast of the Indian Ocean and parts of Southeast Asia. We do know the first Abyssinian imported to North America from England arrived in the early 1900s. However, it was not until the late 1930s that several top quality Abys were exported from Britain to form the foundation of today’s American breeding programs.

In the 1950’s, the Abyssinian began to gain popularity and today it is the most popular short hair breed.

Health and Well Being

Abyssinians are healthy, active cats. They usually live well into their teens and some into their twenties. The Aby is a cat that usually maintains a good activity level even out of kittenhood. As with any cat, they should be kept indoors and free from disease. Regular veterinary checks are important for any cat throughout their lives. You should consult your breeder for the vaccination protocol they have used with their Abyssinians and discuss that protocol with your veterinarian.

Abyssinians, as with many other cats, can develop gingivitis. Fortunately, gingivitis can be avoided if owners are aware. Symptoms include red along the gum line and bad breath. A healthy diet is important in avoiding and treating gingivitis. You should also get your cat in a routine of weekly tooth brushing at an early age. There are many different types of brushes and pastes available. Yearly dental checks by a licensed veterinarian are a good idea.

A kidney disorder called Renal Amyloidosis, which is thought by some to be genetic, has been seen in Abyssinians. It also shows up in other purebred cats as well as random bred cats. Unfortunately, it has been labeled by some veterinarians as an Aby disease. Since it is not exclusive to just Abyssinians, this sort of labeling does a disservice to the breed and hinders the funding for research on the disease. As with any possibly heritable problem, responsible breeders do their utmost to avoid perpetuating this problem. It is important to discuss all possible health matters with a breeder when purchasing a kitten.

Is an Abyssinian the right cat for me?

An Abyssinian, or two, can add such joy to your life. If you are considering buying an Abyssinian, you should contact breeders in your local area. You can search for Abyssinian breeders on the World Wide Web or visit a local cat show.

Abyssinians are most suitable for someone looking for an active and loving cat. They will continue to entertain with their antics for years. Abyssinians seem to live harmoniously with children and other pets. Abyssinians are not well suited to someone who is looking for a pet with a low activity level. You will never be lonely with one in your home!

This FAQ is Copyright © 1997 by Patti Cassalia. Please contact the author if you wish to reprint this document in whole or in part. You may link to this document as long as you properly credit its origin.