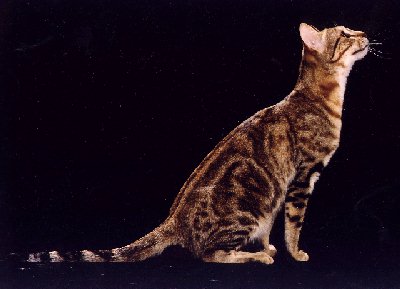 The Sokoke is a long legged moderate-sized cat with a short dense coat without any undercoat. It 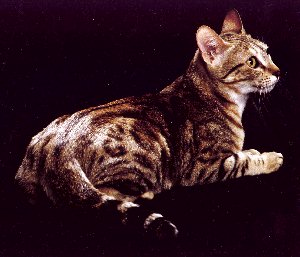 looks a little like a ocelot having an “African tabby pattern” with ticked hairs in the dark part of the pattern. It’s movement pattern can be compared with a cheetahs. They mature very slowly, and only reach sexual maturity at the age 1,5-2 years.

The body is elegant and very muscular, not cobby. High on the legs, back legs a bit higher than the front legs (as seen in many sprinters, e.g. the cheetah). The head looks small compared to the body. The top of the head between the ears is almost flat and has the same width as the base of an ear, with high, angular well-marked cheek bones. Nose medium long and almost straight. Well defined strong chin. Medium ears in harmony with the head but seem larger. Broad at base with slightly rounded tips, tufts are allowed. The base of the ears is parallel with the lines extending from the corner of the eyes. The ears are always in a listening position. The eyes are almond shaped, obliquely placed. Colour from various shades of amber to light green, outlined with darker colour in accordance with the body colour.

The coat is one of the most unusual features of the Sokoke cat. It is shiny and extremely short and elastic, not silky, lying close to the body with no undercoat. It has African tabby-pattern and resembles a blotched tabby, with and “old wood” pattern on the sides, and a sandy ground colour. Pattern colour varies from warm light brown to very dark chestnut brown almost black. There are absolutely no white hairs on a Sokoke cat.

The tail is long, thin, stiff and whip-like with broad rings.

However lately a few “snow Sokokes” has been born. They have the blotched tabby pattern on the body (from cream to greyish beige). There are stripes in the same colour all the way up the legs, striped tail and a “masked” face. They are without necklaces and belly spots. All paw pads are black. The eyes are blue. The snow Sokoke has not yet been recognized.

Photograph in this section: ? of Kildemose photographer Bob Schwarz, Italy

Even if the Sokoke looks like one of the wild cats and has retained all the characteristics of the wild cats, does it bond very strongly to its human – independent and loving, but never clinging. It is totally bereft of aggression and only marks with teeth or claws if strongly threatened. All muscles tense if in danger, ready to flee quickly. The Sokoke is a very sensitive cat and swings with the mood of its human. It is active and quite talkative, having a strong voice, it is an independent cat but it much enjoys the company of its’ humans. It is a proud and highly intelligent cat and you can communicate at a high level using voice and and body language. 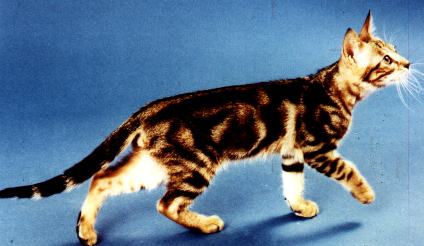 Because they are totally domestic by nature, Sokokes can be kept without permits and licenses normally required in the keeping of wild or endangered species. These little “cheetahs” are totally dependable in personality, they require no elaborate housing facilities, and they are a practical size for a family pet. Qualities that persevere from the wild are: super efficient ears, eyes and whiskers. Camouflaged coats, agile and athletic bodies, a unique self-confidence, and a high level of intelligence. Additionally, the breed strives to preserve genes unknown among the traditional domestic breeds. FIFe’s breed council is taking special interest in preserving these rare genes, and have made strict breeding plans for the few breeding cats. They have not been mixed with domestic cats and are therefore totally unique and is by some though to be a completely independent genera.

Being a cat of the rainforest, the Sokoke has a special relation to water and will just swim across any stream that crosses their path, they don’t seem to enjoy it but take is as a part of life. Another special characteristic is their hard muscular bodies, rendered even more athletic by their extremely short coat through which every muscle can be seen.

The Sokoke cat thrives in groups and gets along well with other cats.

Is This Breed for Me? 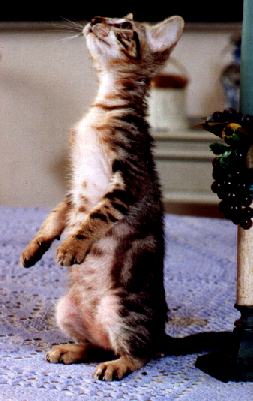 If you want a cat which is playful and interactive, almost “dog-like” in this way, the Sokoke is a terrific breed. They are loving and affectionate and make wonderful but never clinging companions. They love talking and can be quite eloquent, “talking” to you for hours. The noise level of a female in heat can be quite high.

The Sokoke is not a lap cat, but will honour you by sleeping in your lap when it so chooses. It does not enjoy being coddled, but will follow you on equal footing always ready to be petted.

If you’re looking for a cat which will spend a great deal of time snoozing peacefully instead of playing, or a placid cat with a great deal of quiet and refined dignity, the Sokoke is not the cat for you.

As the breed is almost extinct it is of great importance that new Sokoke owners take interest in the breed and works to preserve it with careful planned breeding, or showing. When you get a Sokoke you get more than a cat, you get a challenging hobby.

Sokokes need little care to keep their coats in good condition. Their short dense coat requires no brushing although strokes with your hand makes the fur crackle with enjoyment and health. They hardly shed at all. However a good brushing every day greatly enhances the Sokoke’s mental health and it knows nothing better than sand bathing.

Otherwise, good food, fresh water, regular vet-checkups, regular vaccinations and lots of love is all they need to thrive.

– and a picture of the Sokokes at Jeni Slaters 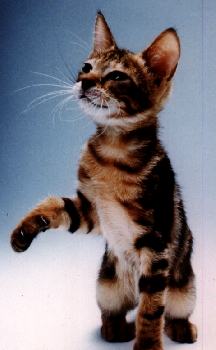 The Sokoke was accepted by FIFe in 1993, as the second breed being accepted by FIFe before the recognition by other cat organizations. There is now two forest cats, the Norwegian and the Afro-Danish Sokoke making their mark on the world of cats. It originates from the Sokoke Arabuke forest on the Kenyan coast, one of the few remaining but rapidly dimishing, rainforests in East Africa.

Historically, we can only find one reference to the Sokoke Forest Cat. This is in the Giriama tribal name for cat “Kadzonzo”. The Giriama tribe have lived traditionally around the forest for hundreds of years. All the tribal elders we have known can describe the best of the Sokoke cats perfectly and can differentiate from the three wild genera, as well as the domestic breeds. This is proof of the cats’ very close relationship with the old culture. Today’s Giriama tend to be ignorant of the Kadzonzo. I believe this is deliberate and has deep sociological reasons…. the modern Giriama do not wish to associate with the primitive, but fairly recent, survival behaviour of the past.

All the older generations discussing Kadzonzo say, ” the cat was very sweet to eat”. We assume from this it was part of the general diet. The cats were probably eaten in preference to the domestic stock, which represented wealth. The old culture had many forms of survival which are now “unacceptable” to the modern Giriama. Therefore “Kadzonzo” is conveniently forgotten. Indeed the name Kadzonzo is almost an embarrassment to some. 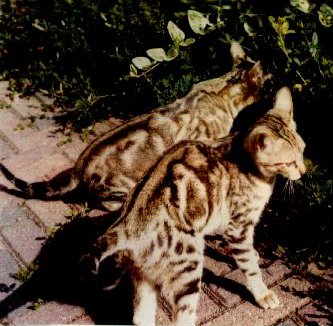 Not much was known about the Sokoke cat before the Kenyan farmer Jeni Slater in 1978 found a litter of kittens in her coconut plantation. Jeni Slater is an experienced horsebreeder and found the kittens so special that she brought them home as pets. Their pattern “blotched tabby” does not exist in East Africa, and their body type is described as “foreign” (tall and slender) whereas the Kenyan housecats are of the “cobby” type and with a much thicker coat.

There is a number of rare species that only exists in the Sokoke forest, but as in many parts of the world the threat to forest habitat by expanding populations is happening here too. The Sokoke bushy tailed Mongoose, the Sokoke golden-rumped Elephant Shrew, the Sokoke Scops Owl are all under threat of extinction. It is therefore not surprising that an unusual feral cat discovered by Jeni Slater caused little or no local interest.

Jeni Slater’s story in the history of the Sokoke cat is now paramount. To quote Jeni Slater: “my gardener came to me one morning in 1978 and reported some strange kittens with a mother born in a hollow under a tree in my garden. I went to investigate, and saw, these huge eyes and big ears, and long tail erect and a smallish head with beautiful body markings. I knew immediately that this was something unusual and I therefore took a pair from the litter. With the help of the house staff I hand reared them. I had much experience in hand rearing orphaned animals during my farming days in Molo Kenya”.

As mentioned before Jeni Slater had little local interest for her find. It was pure luck that the Slaters were professional fishermen, and therefore feeding a growing number of Sokoke cats was not impossibly expensive.

The second piece of good luck for the survival of the Sokoke Cat was that Gloria Moeldrup was a fishing client of the Slaters, Jeni invited Gloria to see the cats, and she also like Jeni recognized a unique makeup, pattern and behaviour of the cat. In 1984 Jeni expressed fear that the breed might not survive in Kenya due to many administrative difficulties. Gloria Moeldrup then decided to move a breeding pair to Denmark, where in 1984, Sokoke cats where shown for the first time in 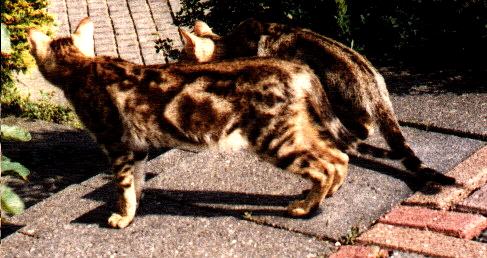 Copenhagen and in 1985 “Jenny” and “Mzuri” had their first litter.

From then on came the long journey to recognition, in 1990 Gloria Moeldrup imported three more cats from Watamu to strengthen the breeding stock. The aim to start with was to breed enough cats to keep the breed alive and healthy.

Then in November 1992 the judges committee of FIFe looked at nineteen Sokoke Cats representing five generations. There are now (1997) about 20 breeding Sokoke cats in Denmark, one cat in Italy and three in Holland.

The first generations of Sokoke cats in Denmark seemed very prone to the infections that our native cats handle with ease or at least easily with the help of vaccinations. But current generations seems to have overcome this problem and has now no generic health problems. It just has to be remembered that the coat is very short and bereft of any undercoat so the cat chills easily.

Gloria Moeldrup passed away February 1997 and much information, such as who some of the cats on the photos are, has already been lost.