Physical Description
Characteristics and Temperament
Is This Breed for Me?
Care and Training
History
Special Medical Concerns
Breeders
Somali Websites and Pages 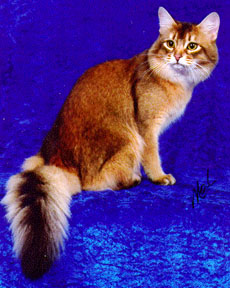 The Somali is a moderate-sized cat with soft, medium-length fur and a bushy tail which has sometimes earned the cat the nickname “fox cat”. Somalis are also referred to as “longhaired Abyssinians”, since Abyssinians are the “parent breed” of the Somali breed.

Somalis are sweet-faced, lithe, muscular cats with an overall impression of alertness, intelligence and keen curiousity. A standing Somali should almost give the impression that it’s standing on its toes. The best term for a Somali would be “moderate” — medium hair, medium size, medium type (neither cobby nor svelte).

Somalis are ticked cats. Each hair on their bodies has bands of darker color, sometimes as many as 10 or 12 in a Somali. The ticking is darker than the ground color, giving the impression of a gloss or shimmer to the cat. Although ticking is a type of tabby, the show-quality Somali has no stripes on its body. A pet-quality Somali may show some tabby striping on its legs, tail or throat. The ticking usually causes a darker shine of color along the cat’s back and on the tip of its brushy tail, and gives the cat an exotic, wild look. This shimmery line of darker color is sometimes referred to as an eel stripe. Although the fur might look coarse, it’s extremely soft, almost rabbit-like.

Somalis have the tabby “M” on their foreheads, and display pencil-strokes of darker color drawn out from the corners of their eyes. As the darker color also rims their eyes, Somalis may look as if they’re wearing eye liner. They usually have no white on them, other than white around their mouths and under their chins. White on other parts of their bodies is considered a disqualifying fault for the show-quality Somali.

Somalis are accepted by all cat associations in four colors: ruddy, red, blue and fawn. The chart below will help decipher these colors. Somalis also have corresponding nose and paw leather colors, depending on the color of the cat.

Somalis have gold or green eyes in all colors, with the more depth and richness of color the better. Some associations, such as the American Cat Association, also accept hazel. Females are smaller than males, weighing about 6-10 pounds on average as adults. Males are an average of 10-12 pounds as adults, although some may be larger. The Somali coat color develops slowly, and doesn’t show its full, mature ticking and coloring until age 18 months. Kittens tend to be darker and less warm-colored than they will be in adulthood.

Somalis generally have longer hair over their chests (the “ruff”) and on their hindquarters (the “breeches”). Their tails are full and brushy, almost like that of a fox. 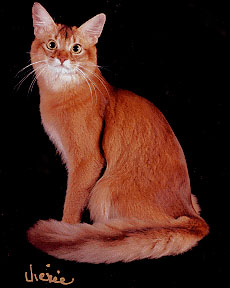 Somalis are active, playful, interactive cats. Like their parent breed, the Abyssinians, Somalis seem to wake up every morning with a “to-do” list. They should be given plenty of room to run, lots of individual attention and play, and a variety of toys. However, they tend to be calmer and less active than the Abyssinian.

Somalis seem happiest if kept with another cat of about their own activity level. Contrary to what some cat books say, though, Somalis do very well as indoor-only cats, provided that they are given plenty of room to run and play.

Somalis are even-tempered and easy to handle. They are ideal cats for households with children, as they are quite gentle (provided the children do not abuse them). They also do well as in a “mixed pet” household, getting along well with other animals.

Somalis are extremely affectionate and people-oriented — “loves a party and all the guests”, as one of my kitten buyers told me.

They are also extremely inquisitive and clever, which may cause some trouble for the cat! An open door is as good as an invitation, as are garbage pails, windows and open drawers. Fortunately, they are also easy to train to use scratching posts.

Like Abyssinians, Somalis are generally quiet cats, with soft voices they don’t use a great deal. Somalis are adept communicators, but don’t rely on their voices to do so. This can be frustrating for breeders, as some few Somali females may have a “silent heat” (in heat but doesn’t call). Buyers of pet Somali females should also be careful to have their female spayed as soon as she is old enough for this reason, so an inadvertent breeding doesn’t take place. Somali females have been known to go into heat as young as five months.

They also shed very little, less than many short-haired cats. They have two seasonal moults in spring and fall, but otherwise shed minimally throughout the year.

Many Somalis exhibit what breeders jokingly refer to as the “hairdresser gene”. For some reason, many Somalis seem to have a need to “dress” the hair of their human owners! Many Somalis will try to groom their owners’ hair, beards, and moustaches, particularly if they are wearing any kind of hair-care product such as hairspray or mousse.

Is This Breed for Me? 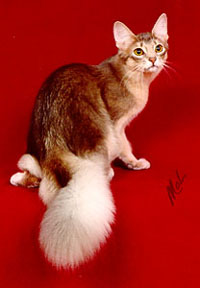 If you want a cat which is playful and interactive, almost “dog-like” in this way, the Somali is a terrific breed. They are loving and affectionate and make wonderful companions. Many are avowed and devoted lap cats and are forever following “their” human around.

If you’re looking for all the beauty of the long hair without the fuss or shedding, the Somali is a good choice. (See Care and Training below).

If you’re looking for a breed that’s good with children or to introduce into a multi-pet household, the Somali is a good choice.

If you’re looking for a cat which will spend a great deal of time snoozing peacefully instead of playing, or a placid cat with a great deal of quiet and refined dignity, the Somali is not the cat for you.

I would not recommend a Somali for an elder who is frail, as any Somali owner will tell you that Somalis are very good at getting underfoot.

Somalis are intelligent but somewhat willful. Thus, training is done far better with rewards than with punishment. They can be trained easily to use a scratching post by heaping attention and pats on them whenever they use it. They can be trained to do simple tricks with relative ease, such as fetching and shaking hands.

Somalis need little care to keep their coats in good condition. Their soft, silky hair requires little brushing, although most Somalis love the attention if brushing is viewed as affection time rather than a chore. They do not mat, although the longer fur around their hindquarters can sometimes mat if not brushed regularly. As stated before, they shed very little.

Otherwise, good food, fresh water, regular vet-checkups, regular vaccinations, toys, and lots of love is all they need to thrive. 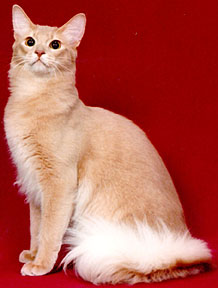 Where the longhaired gene came into the Abyssinian population is a a subject of speculation, but before the Somali breed began to be advanced in the late 1960s, longhaired kittens popped up in Abyssinian litters. These longhaired kittens, which couldn’t be shown or used in a breeding program, were quietly neutered and given away or sold as pets.

The Somali is a remarkably hardy cat, with few associated health problems.

Like many cats of all breeds and mixed breeds, Somali are prone to gingivitis. This condition should be monitored at annual veterinary visits (more often if a problem occurs). Feeding the cat a large portion of its diet as a high-quality dry food helps this problem.

It has just been discovered that a few lines of Somali may be prone to a type of anemia called auto immune hemolytic anemia (AIHA). If you have a Somali with anemia or anemia-like symptoms, request a PCV blood test. This test is not usually done on a normal blood workup for cats, as AIHA is found much more commonly in dogs. The normal treatment for AIHA is steroid therapy. The problem is that the symptoms can be close to a fairly common cat disorder, feline infectious anemia (FIA), which is treated with antibiotics. This is an inappropriate therapy for AIHA. Somalis are no more or less prone to FIA than any other cat.

If your Somali is anemic you should consider getting pet insurance to cut down on medical costs.

A pet-quality Somali kitten in the United States will generally cost about $400 – $600 US, depending on the region, a usual price for pet-quality kittens of many breeds.

Breeders of Somalis may be found through the Fanciers breeder listing page.

Somali breeders are also listed in such magazines as Cat Fancy, Cats Magazine and Cat World.

Somali cats may also be available through Somali and Abyssinian Breed Rescue and Education (SABRE). Somalis rarely end up in shelters, but those few that do may find their way to SABRE and may be available. To date, all such rescues have been adult cats. For more information about SABRE and information about cats who may be available for adoption to an excellent home, consult the SABRE homepage, or e-mail contact Erin Miller.

There are many documents about the Somali online. If you know of any I have missed, please let me know!