Ragdolls are large, docile cats. They are sweet-faced and muscular, with an overall impression of elegance and balance. They have a medium-long, non-matting coat with a soft texture like rabbit fur. They are pointed in color (like the Himalayan or Siamese) and appear in seal point, blue point, chocolate point, and lilac point, with or without white markings.

Is This The Breed For Me?

If you want a large cat which is non-aggressive, loves to be with people, and is very placid, you may want to consider a Ragdoll. Also, if you love the look of a long-haired cat, but do not want the constant grooming associated with breeds such as the Persian, a Ragdoll would be a good choice. The gentle Ragdoll is also good with children and is easy to introduce into a multi-pet household.

If you want a very active or talkative cat, then you might not be happy with the less-active Ragdoll.

Ragdolls are large, heavy cats, with broad chests and large hindquarters. They are slow-maturing, and do not reach full maturity until approximately three years of age. Females are smaller than males, weighing about 10-15 pounds on average. Males weigh an average of 12-20 pounds as adults, although some may grow to be larger.

Ragdolls have large, oval, blue eyes and sweet expressions. Their large, rounded ears are set with a slight forward tilt. They have a curved profile with the look of a “ski slope” as it merges to the top of the head.

Their medium-long coats and bushy tails have a soft texture that feels like rabbit fur. In general, Ragdolls have longer fur around the neck (a “ruff”) and on the back of the hindquarters (sometimes referred to as “britches”). The fur does not tend to mat, and is easily combed. It does, however, require occasional grooming.

Ragdolls are pointed cats. Like other pointed breeds such as the Himalayan and Siamese, Ragdoll kittens are born all white and slowly develop color. The color continues to deepen as the cat ages.

In most associations, Ragdolls are accepted in 3 patterns and 4 colors. The three patterns are “colorpoint,” “mitted,” and “bicolor”:

To describe a Ragdoll, combine the color and pattern names. For example, a seal Ragdoll, depending on the pattern, might be a “seal colorpoint,” “seal mitted,” or “seal bi-color.” 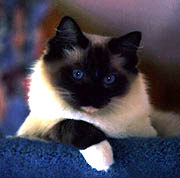 Ragdolls (as their name implies) are extremely “laid-back,” docile, non-aggressive cats. They tend to relax when held. They are said to possess a non-fighting instinct, which means that if attacked, they do not defend themselves. They are very “people” oriented and love to be around others, which often finds them greeting guests and/or following their owners around in a fashion similar to a puppy. They are often quite an attraction in a show ring because of their docile dispositions and acceptance of the judge placing them on their backs, holding them like a baby, etc.

In general, Ragdolls are not extremely vocal, but they do voice their opinions concerning certain things (such as at mealtime!). Ragdolls are generally placid cats, but they do love to play with all types of toys and like to be involved in whatever “action” is going on.

Ragdolls are intelligent and like to please their owners. Training Ragdolls is much more successful when done with rewards. For example, they can be trained easily to use a scratching post instead of your furniture by lavishing attention on them whenever they use the post. As with most cats, however, Ragdolls can be their “own boss” if they so choose!

They do not shed excessively, and need little care to keep their coats in good condition. Their soft, rabbit-like fur does not tend to mat. The fur does require occasional combing or brushing, and the longer fur around the hindquarters should be combed regularly. In general, Ragdolls do not mind being groomed and, in fact, often enjoy the grooming sessions.

Because Ragdolls lack the instinct to defend themselves when attacked, they must be kept as indoor pets only. However, they can be easily leash trained so that they can go for walks with you outside.

Otherwise, good food, fresh water, regular vet-checkups, regular vaccinations and lots of love is what they need to thrive. Bits of fresh raw beef can also be fed, as it helps clean the teeth and gives good nutrients, but be *very* sure of your supplier before doing this!

No specific medical conditions have been noted with this breed. However, as with all breeds, certain “lines” might have a tendency toward specific health problems. It’s probably a good idea to talk to the breeder about whether his/her cats come from lines with any health risks.

In the early 1960’s, a woman from California named Ann Baker created the Ragdoll by breeding a white female Persian to a male Birman. She then introduced a female Burmese into the breeding program. This combination resulted in the Ragdoll breed. She then founded the IRCA organization in approximately 1971, which had very stringent “rules” for owners of her cats. The IRCA still exists, but Ragdolls produced by the IRCA are not accepted in any major association.

Fortunately, a husband and wife team bought a pair of the original IRCA Ragdolls and realized that this breed needed to be standardized, shown, and accepted by the various associations in the cat fancy. They worked on an extensive, selective breeding program, out of which grew the standardized Ragdolls. The Ragdoll Fanciers’ Club International (RFCI) was then formed to promote the breed and set specific guidelines for Ragdoll breeders.

RFCI Ragdolls are bred Ragdoll to Ragdoll only, with no outcrossing to any other breeds. They have specific breed standards, to which the breeders must adhere. RFCI Ragdolls are now accepted for registration in all cat registering associations.

RFCI Ragdolls have championship status in all associations except CFA. In CFA, the bi-colors may be shown in the miscellaneous class, and the colorpoint and mitted patterns can be registered but not shown. Ragdolls have done well in the associations in which they are accepted. The Number 1 Inter-American Alter for the 1992-93 show season in ACFA was a blue bi-color Ragdoll, which exemplifies the beauty and appeal of this breed.

The IRCA Ragdolls are not accepted in any association (except IRCA).

The Ragdoll Fanciers’ Club International (RFCI) is the breed club for registrable Ragdolls. This club works with all the major cat registering associations to further the Ragdoll breed. It puts out a newsletter, Ragdoll World, and gives year-end awards for the highest scoring Ragdolls, regardless of what association they are shown in.

There are also Regional Directors who can be contacted. The RFCI secretary would be able to help you with this information.

You can contact the RFCI for more information on Ragdolls or for a list of registered RFCI breeders. You can also speak with breeders at cat shows. Ragdolls are more commonly seen at TICA or ACFA shows.

Ragdoll breeders are also listed in such magazines as “Cat Fancy” and “Cats Magazine”. Be cautious as to whether you are contacting an IRCA breeder or a breeder who produces the standardized, registerable (RFCI) Ragdolls. When looking at the breeders’ advertisements in periodicals such as “Cat Fancy” or “Cats Magazine,” note that the RFCI Ragdolls are listed with the other breeds, but the IRCA Ragdolls are listed in a separate area apart from the other breeds. To acquire a standardized, registerable Ragdoll, consult the RFCI breeders section.

Breeders of all breeds of cats may be found through the Fanciers breeder listing page.