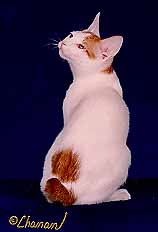 The Japanese Bobtail is a rare and ancient breed, found in Japan and across most of southeast Asia. The breed has been depicted in works of art that we know to be centuries old. The cat is much-cherished in its native land; many myths and legends (as well as historical stories) surround the breed. One of the more famous surrounds the maneki-neko, the beckoning cat, which is a stylized rendition of a Bobtail seated with one paw raised. Considered to be a good-luck charm, a maneki-neko statue is often found in store fronts. Look around the next Japanese restaurant you visit — you’ll likely spot one.

The essential Japanese Bobtail is an active cat, medium to small in size (6-9 pounds), with a characteristic short pom-pom tail, who combines the reflexes and intelligence of a breed which has survived by its wits for centuries, with the elegance and grace so prized by the culture in which it evolved. Bright colors, especially the calico (called mi-ke, meaning “three-fur”, by the Japanese) are most preferred, but the Japanese Bobtail can come in any color. Japanese Bobtails come in both shorthaired and semi-longhaired varieties. The tail is naturally short, and never cut or docked.

The prototypical Japanese Bobtail temperament is strong-willed, active, and energetic, but very affectionate to its family. They are stable, not high-strung, and not easily intimidated; this makes them an excellent cat for children (the kids and the cat will wear out at about the same time), but can also make them difficult to train to not do something. (A Bobtail will, say, insist on licking the sink clean of tuna juice, and will quickly become habituated to and blasé about the squirt bottle, or just about any other method of negative reinforcement one can come up with. If you solve this particular training problem, please contact the author, who has given up. 🙂 In contrast, the Bobtail can easily learn to do something, such as go for walks on a leash, as long as it is made a fun game for the cat.

The Japanese Bobtail is an active cat. Plan on regular games of feather, pong, and chase-the-string. The Bobtail absolutely requires companionship (human, feline, or other), as boredom can lead to destructive behavior. We once placed a kitten with a couple (one grad student, one professional) who were sure they would have enough time to keep the kitten entertained. Three days later, we recieved an emergency phone call — We love her, we love her, we love her, she’s driving us crazy, we have to have another. Three days later, new kitten delivered, there was peace in the family once more.

In our experience, Japanese Bobtails get along well with other cats. Occasionally, two female Bobtails will both decide that they must be the dominant cat, and squabbles will erupt until one or the other (or the owner!) gives in. Others have reported that a group of Bobtails can tend to be cliqueish among themselves and avoid other (non-Bobtail) cats. Japanese Bobtails, being fearless, get along with dogs just fine.

The most popular color for a female Japanese Bobtail is calico, known to the Japanese as mi-ke (pronounced “mee-kay“). Red and white, and black and white, are common colors for both sexes. Solid-colored cats without white markings (black, blue, red, cream, tortoiseshell, solid white), tabbies (brown tabby, red tabby, blue tabby, cream tabby, patched tabby or patterned mi-ke) and dilutes (blues, creams, blue-creams, dilute mi-kes) exist, but are harder to find. Many Japanese Bobtails with a lot of white are either blue-eyed or odd-eyed (one blue and one gold eye); this is a flashy and popular color, and such kittens are generally more expensive. Smokes and silvers have recently turned up in the North American gene pool, but can be hard to find.

As the Bobtail is an Asian breed, some registries allow the pointed (Siamese) and sepia (Burmese) colors, and some do not. Since imports from Japan can still be registered, the gene pool is still open to native cats.

The Japanese Bobtail is a chiseled, angular cat, whose smooth coat should hint at the porcelain statues modelled after them. The tail for which the breed is named is short (should not extend more than 3 inches from the body of the show specimen), and as individual as fingerprints. It is composed of one or more curves, notches, kinks, or angles in the bone itself, but the structure of the tail is camouflaged by the tail hair, which fluffs out to resemble a pom-pom. This is especially dramatic in the semi-longhairs, whose tails resemble a chrysanthemum in full bloom. The bones in the tail are generally fused (although most Bobtails can wiggle their tails at the base, and some have tails that are jointed in one or two places), so it should be handled gently.

The head structure of the Japanese Bobtail is like that of no other breed. The head is in fact an equilateral triangle (not including the ears), but the long, high, chiseled cheekbones accentuate the length of the head. The ears are large, tipped forward slightly as though listening, and set on the corners of the head so that the outer edges of the ears are parallel to each other. The eyes are large, and are set at an Oriental slant which makes the cat unmistakably a Japanese Bobtail — even if you don’t glance at the tail. The profile should be a gentle curve, and the chin should be firm and in line with the nose and upper lip. The muzzle should neither be square nor pointed, and there should be a definite break between the muzzle and the cheekbones. Definite whisker pads accentuate the look.

The Japanese Bobtail is classified as a semi-foreign breed, which means that the body should be long, firmly muscular, with a narrow chest, but some depth to the flank (not tubular like the Siamese and Oriental Shorthair). The legs are also long, so that the cat presents a square appearance (unlike the Maine Coon, which has a long body but medium legs presenting a rectangular appearance) when viewed from the side. The legs are refined without appearing delicate,

and the hind legs are somewhat longer than the front legs, but deeply angulated at rest (as shown in the illustration; our model is GRP/SGCA,IW Janipurr’s Odori-Ni-Hane of Ambar, shown at five months of age), so that the back is carried level. The paws are small, neat, and oval.

The Japanese Bobtail coat should feel soft and silky to the touch, not hard. The shorthair variety should appear flat, not fluffy, although the hairs are actually medium in length. Keep the porcelain statue appearance in mind. The semi-longhairs should have belly shag and definite britches on the hind legs, and something of a ruff as well, at least in the winter. While the semi-longhairs are subject to seasonal shedding, the tail should leave no doubt as to whether you are looking at a shorthair or a longhair, in any season. Both types of coat are actually quite water-resistant, such that the most difficult part of show grooming a Japanese Bobtail is getting them wet during their bath!

Like the Japanese Bobtail, the Manx came about as the result of a natural mutation occurring in a gene pool limited by the borders of an island. That is where the similarity begins — and ends. The Manx is a heavy-bodied and muscular cat, with no tail at all (in the show specimen). The Japanese Bobtail is a tall, elegant, refined cat in appearance, with just a “puff” or a “pom” of a tail.

Less is known about the American Bobtail, as the breed is still in development, but it is believed to be a variant of the Manx gene, and no relation to the Japanese Bobtail. It is being developed as a large, shaggy, semi-longhaired breed with a tail which is about half the length of a normal tail.

The Japanese Bobtail breed is recognized by the following registries:

There are two unaffiliated JBT breed clubs, as well as any number of clubs affiliated with the various registries. Both clubs welcome “fancier” (non-breeding) members. They put out quite nice newsletters with information on cat care, stories and historical lore about the Japanese Bobtail, pictures of new grands, and listings of new litters.

and most produce very few kittens each year. You probably will have to get on a waiting list, especially if you want a mi-ke, or an odd- or blue-eyed kitten. If a breeder is not able to provide a kitten within a reasonable time, he or she may refer you to another breeder.

Additional breeder listings can be found in Cat Fancy and Cats Magazine in the US and Canada, and in Cat World in the UK.

This FAQ was written by Jean Marie Diaz (Ambar), aided and abetted by Jennifer Reding (Janipurr), who together are Gaijin Japanese Bobtails. We would also like to acknowledge and thank those off-line breeders who have taken the time to share their knowledge, and in some cases, their cats, with us: Linda Donaldson (Kiddlyn), Dee Hinkle (Choneko), Barbara Romanos (Nekolady), Belle Nau (Furrfayar), and Marianne Hamilton (Kurisumasu). Any errors in the above text are ours, not theirs.

Copyright © 1995-1998 by Jean Marie Diaz (ambar@clock.org). Comments welcomed at this address. All images are Copyright © by the photographers. All rights reserved. Pictures may not be downloaded or copied.

[an error occurred while processing this directive]